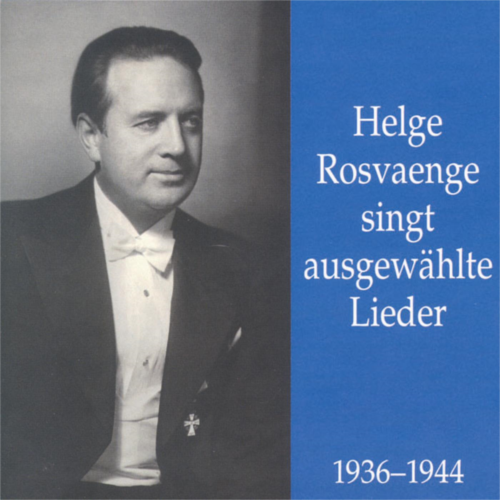 Helge Rosvaenge, one of the greatest tenors ever to appear upon the German operatic stage, was born August 29, 1897, in Copenhagen. Following completion of his intermediary schooling, he entered the Polytechnic Institute in 1915 to take up the study of chemistry. However, along with his academic training, he had already begun his voice studies. In order to rest up from his university examinations, he accepted invitation to spend some time with a culturally active married couple, with whom he was acquainted, and who introduced him into the theatre circles of Schwerin, the capital of Mecklenburg. Following a successful audition, he celebrated his stage debut in 1921 at the Mecklenburg National Theatre in Neustrelitz. From 1922 to 1924, he appeared at the Altenburg National Theatre in Thuringia. From there he went to the Municipal Theatre in Basel where he remained until 1926, thereafter continuing on to Cologne. During his engagement at the Cologne Opera House, he became closely associated with Verdi's operas which from this point on became a prominent part of his repertoire. His firsts real success came as Alfredo in "La Traviata", performed in 1929 at the Berlin State Opera. His partner was Gitta Alpar. He was retained here as the logical successor to Richard Tauber, who had just canceled his contract. Up until the close of the war, he remained without interruption as one of the leading tenors of this famed opera house. He found in Leo Blech not only a friend but an inestimable assistant and supporter in his artistic career and to whom he owes a large part of his repertoire. From 1930 on, he was signed up as a guest performer at the Vienna State Opera. However, he remained a resident of Berlin which he did not leave even during the large-scale bombings during World War II. After the opera houses in Berlin had been closed down in line with the "total war" policies, he continued to appear in concerts. After the Russians marched into Berlin, he was taken into custody as a suspect foreign collaborator and spent several months in an internment camp in Krassogorsk near Moscow. From here he was brought to Sweden. As a "germanophile", he was refused admittance by his mother country, Denmark. In spite of these tribulations, he determined to start anew. He risked to voyage to Venezuela, together with a group of Baltic refugees, in a primitive cutter. En route, at the Canary Islands, he received favorable news from home, which induced him to undertake a second start in Basel. His partner was a young neophyte, Lisa della Casa. One year later, he met up with Maria Cebotari in Vienna. He sang the role of Calaf in the memorable staging of "Turandot", to which for the last time Maria Cebotari, though already market by the signs of death, was to lend the immense power of her personality. He was present at the reopening of the Vienna Opera that had been destroyed during the war. The newly built State Opera on Unter den Linden, the scene of his earlier successes, offered him a new engagement. The unique stage of perfection attained by Helge Rosvaenge is a result of the integration of his fascinating vocal splendor and brilliant voice technique with great histrionic ability. On the occasion of his 40th anniversary on the stage, he performed an evening of arias in Vienna in the auditorium of the Music Association during which he sang thirteen of the most difficult arias, from German and Italian opera. This was a program which most singers today would have spread over period of three evening performances. Following this concert, a well-known critic wrote: "During his career, he never took the easy way but gave everything he had, and continues to do so even now. He appears indestructible as does his technique. This man cannot live without singing. One becomes aware of this fact after having witnessed this notable example of apparent eternal youth."