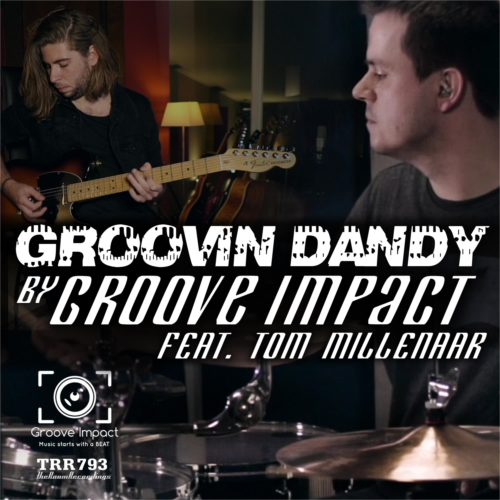 GROOVE IMPACT – feat. Tom Millenaar Title: GROOVIN DANDY Here is a new play-along-for-drummers composition titled: GROOVIN DANDY. On this track you can hear our featuring drummer artist Tom Millenaar as one of our advanced students at the Groove Impact Academy. This composition is made on demand for him. However during the preparations we decided to add an upgrade and challenge him by i.e. putting in a short drumsolo and an ending arrangement. Listen to the music and also watch this cool video, and don’t forget to download or stream the play along version that wil be released in a few weeks. ENJOY!Composer: Juan van Emmerloot,Drums: Tom MillenaarLead guitar: Nick JongejanBass, rhythm guitars and keys,: Juan van EmmerlootProduction: Juan van EmmerlootRecorded & mixed at: Vanmerloot Music ProsMastered at: TheRoomRecordings by Emile BodeCamera, Director video edit at BTA by: Tim van Emmerloot