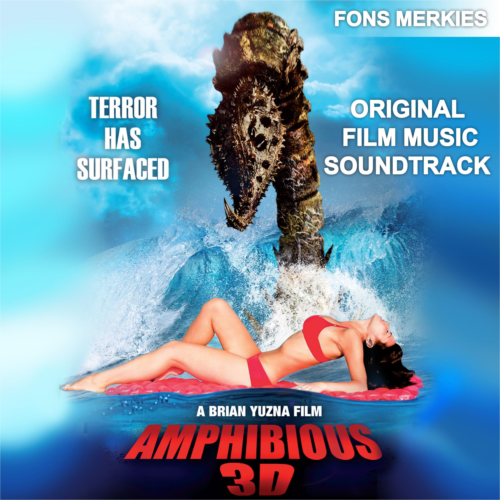 Music by the famous Dutch Film composer Fons Merkies. ABOUT THE FILM: Marine biologist Skylar Shane hires an expat charter boat captain, Jack Bowman, to help her find prehistoric life form samples in the north Sumatran Sea. During the expedition, they run into some of Jack's 'friends', a gang of smugglers headquartered on a fishing platform in the middle of the sea. Tamal, an orphan sold into servitude on the fishing platform by his uncle, a 'Dukun' (sorcerer and master of black magic) shaman, begs Skylar to take him away. She empathizes with the boy, who reminds her of her lost daughter, Rebecca, and is determined to help him, not knowing what lurks beneath the dark inky water, waiting to surface. Ever since Tamal arrived, mysterious things begin to happen, until one by one the smugglers will be killed by the terrifying creature from the deep. In the middle of an eerie, violent storm, the animus inside Tamal grows stronger, calling for the ancient creature of his nightmares. Now Skylar and Jack must battle the terror - once locked deep in the abyss by an old civilization, as it is now about to resurface. RIVA MEDIA RECORDS has released soundtrack albums of films and TV series, such as: STRICKEN (in Dutch: 'Komt een vrouw bij de Dokter', in German: 'Love Life', in Spanish: 'Prueba de Amor', shown in many territories throughout the World) FLIKKEN (COPS) MAASTRICHT (In Italy on TV as 'Coppia in Giallo') ALLES IS LIEFDE ('Love is all') with the film music by Rec Sound TIRZA THE HEINEKEN KIDNAPPING (film music by Tom Holkenborg) DE GELUKKIGE HUISVROUW DOLFJE WEERWOLFJE ('Alfie, the little Werewolf') 3D film NOVA ZEMBLA featuring famous model Doutzen Kroes, of which the main music theme is remixed by world's number one DJ Armin van Buuren. LIJN 32 with the music of Tom Holkenborg ALLES IS FAMILIE with music of Fons Merkies ALLEEN MAAR NETTE MENSEN DE MARATHON NONO THE ZIGZAG KID HET BOMBARDEMENT JACKIE DAGLICHT with the music of Bart Westerlaken