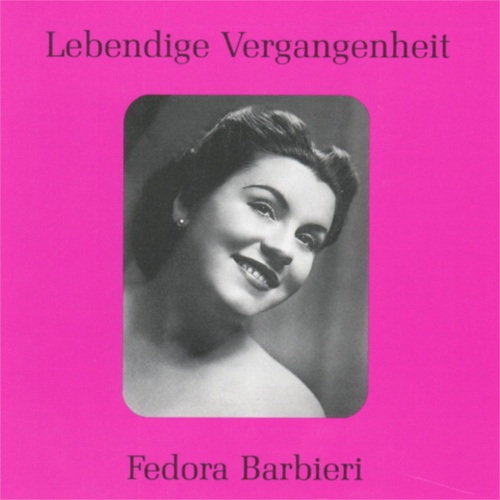 Self-confident but also self-critical, Fedora Barbieri assessed her success more aptly than any of her ardent admirers, stern critics or detached biographers could ever have done. Asked in December 1988, when she was a juror for the International Singing Competition in Paris, whether singing ability was the result of natural talent or hard work, she answered: "lt varies. Aureliano Pertile devoted years of hard work to perfecting his voice. Titta Ruffo, on the other hand, simply took advantage of his fantastic natural gift. I would say that I belang more to the latter category. A special natural talent is certainly advantageous at the beginning of a career, because it means that one can score success at a relatively young age. Later one would be grateful for every additional year of training that one might have had." Born on 4 June 1919 (not 1920, as sometimes stated), the daughter of a well-situated merchant in Trieste, Barbieri was not planning a singing career when she finished school; she wanted to take over her parents' business. But after a number of singing lessons with Federico Bugamelli she appeared publicly for the first time at the Basilica di San Giusto in Trieste and then received mostly musical, rather than vocal, training from the conductor Luigi Toffolo. In 1939 she began studying at the opera school of the Teatro 'Comunale in Florence with Giulia Tess, a legendary former Salome and Elektra at La Scala in Milan. From her the young singer learned to take advantage of her dominant personality to produce convincing stage performances. Throughout her life her singing was more an expression of her natural singing talent than of the kind of vocal virtuosity that her famous mezzo colleague Giulietta Simionato had acquired during many years of training. In November 1940 Barbieri began her career as Fidalma (Il Matrimonio segreto) and Azucena in Florence. Her breakthrough came in 1941: at the Maggio Musicale Fiorentino she was the first Dariola in the premiere performance of Don Juan de Manara by Alfano. In June she was a sensational Cenerentola at the International Music Festival in Venice, and in December she sang her Rome debut as Adiola. In 1942 she performed for the first time at La Scala in Milan and established a reputation outside Italy as well with guest appearances in Germany, Belgium and Holland. In 1943 she married the artistic director of the Maggio Musicale, Luigi Bartoletti, and until the war was over, her activity was focused primarily on Florence. Beginning in 1945, she was for many years a star of the opera festival at the Baths of Caracalla in Rome. In 1946 she scored spectacular success at La Scala in Milan as Amneris, Carmen, Preziosilla and Cenerentola, establishing an international reputation as the successor to the great Ebe Stignani. In 1947 she sang her debut at Teatro Colon in Buenos Aires. The same year she sang her first and only Wagnerian role, appearing in Venice as Brangäne, with Maria Callas, Fiorenzo Tasso and Boris Christoff as her partners. In 1950 she appeared for the first time in London and sang Eboli in the Don Carlos performance on 6 November 1950, the opening night of the Bing era at the Metropolitan Opera. Between 1955 and 1958 she sang at the Arena of Verona, appearing in the roles of Carmen, Amneris and Laura (La Gioconda), but then began having increasing vocal difficulties. The 1958 London recording of Don Carlos shows with what virtuosity she was able to impress her audience, despite her difficulties with exposed high notes. In around 1965, she began increasingly to sing character roles, attaining in Italy a standing similar to the legendary Martha Mödl on the German opera stage. She appeared for the last time in November 2000, as Mamma Lucia in the Florence production of Cavalleria rusticana, which marked the 60th anniversary of her stage debut. She died in Florence on 4 March 2003. Without a doubt Barbieri's special domain was to be found in the dramatic mezzo roles of die Roman opera in every conceivable style, from Monteverdi to Dallapiccola. Given this situation, her personal choice of career highlights may seem surprising. In first place she mentioned the reopening of La Scala in Milan on 24 June 1946, when Beethoven's Ninth Symphony was conducted by Arturo Toscanini. Not far behind, in Barbieri's opinion, was the performance of Orpheus conducted by Wilhelm Furtwängler on 7 April 1951 in Milan as well as the equally unforgettable performance of Verdi's Requiem, which she sang in Salzburg on 20 August 1952, under the baton of Victor de Sabata.