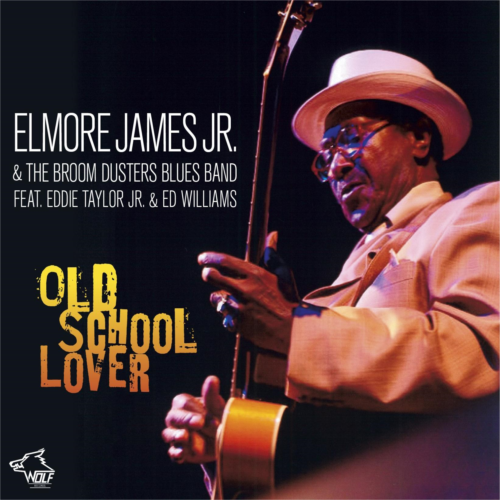 Elmore James Jr. is one of the last old-school blues slide guitar players in Chicago. His father Elmore James created the electric slide guitar style by putting a pick-up on his acoustic guitar; his first recording was an electrified band version of Robert Johnson's great song “Dust My Broom”. After Elmore sen. died in 1963, a number of guitar players carried the torch and continued to play with the slide in the classic Chicago blues style: Muddy Waters, Hound Dog Taylor, Joe Carter, J.B. Hutto, Lil' Ed Williams and last but not least Elmore James Jr. Honeyboy Edwards, Louis Myers, Eddie Taylor sen. and jr., John Primer and Johnny Littlejohn can be added to this list, but they also play(ed) in regular tuning. Elmore Jr. has always been playing in open D tuning - for 50 years! - and he surely knows his stuff. He learned a little bit from his father, but unfortunately he died so early. I don’t know why only European blues labels (JSP and Wolf) have found a musician in Chicago who knows how to play in a real down-home blues style? This year (2012) Elmore Jr. will play at the Lucerne Blues Festival and also at the Vienna Blues Spring 2013. No other Chicago blues band can play Elmore senior's famous original blues style the way Elmore James Jr. & His Broomdusters can; the band includes two more masters of Chicago blues – Eddie Taylor Jr. on guitar and Ed Williams on saxophone. And the other band members also know how to play the real thing. If you want to read more about Elmore James Jr. you have to order his first CD, "Baby Please Set A Date", from Wolf Records. With this and the earlier CD you have real blues history in your hands. Enjoy!