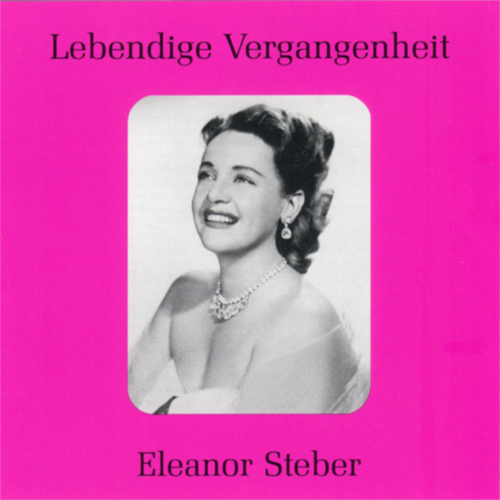 Eleanor Steher 17 July 1914 - 3 October 1990. In his 1999 book The American Opera Singer, Peter G. Davis devotes three chapters to the American sirigers who performed at the Met while Edward Johnson was director. In "Johnson Babies I" we find such great names as Traubel, Vamay, Stevens and Resnik, while "Johnson Babies II" is dedicated to gentlemen that include Peerce, Tucker, Merrill and Hines. Eleanor Steher has a chapter of her own; she was the only Metropolitan diva of her generation to attain the popularity of a Hollywood star and was well-known even among segments of the population that were indifferent to opera. Because of the radio programme The Voice of Firestone she became famous in the USA around 1936, long before she came to the Met. Steber was born on 17 July 1914 in Wheeling, West Virginia, the great-granddaughter of German immigrants. According to her own account, Steber's first and lasting memory was of her mother's voice. lda Nolte-Steber regularly sang the soprano solos at St. Matthew's Episcopal Church, and the singing career of her daughter compensated for the one she never had herself. Eleanor received her first piano and voice lessons from her mother, who paid for her daughter's studies at the New England Conservatory of Music in Boston out of her personal savings because Eleanor's father, William Steher, wanted nothing to do with his daughter's artistic career. William Whitney, who began teaching the ambitious young woman piano in 1933, also became her singing teacher after he discovered Eleanor's vocal talent. Steher began her career in Boston in 1936, singing the role of Senta. She concluded her studies with the former Met tenor Paul Althouse in New York, and on 9 March 1940 she won first prize in the Metropolitan Opera Auditions of the Air. Following her Met debut on 7 December 1940 as Sophie (Der Rosenkavalier) she made her way through such roles as Woglinde, Waldvogel, Blumenmädchen and one of the ladies in The Magic Flute to Micaela in 1941. In 1942, having sung Countess Almaviva and Donna Elvira, she appeared to be establishing reputation as a Mozart specialist, but starting in 1943 she demonstrated her versatility as Margarete, Giulietta and Antonia, Alice in Falstaff and Traviata as well as Eva and Elsa. In 1946 she sang her first Konstanze at the Met, appearing in 1947 as Pamina andin 1951 as Fiordiligi to become the Met's most important interpreter of Mozart. Intemationally she was apparently interested only in festivals. In 1947 she made a guest appearance as Countess Almaviva with the Glyndeboume ensemble in Edinburgh. She also sang Elsa in Bayreuth in 1953, Minnie in Fanciulla del West at the Maggio Musicale in Florence in 1954 and Vanessa in Salzburg in 1958. According to Davis, Eleanor Steher could have been the outstanding singer of her generation. But she loved the good life and searched for extremes in her work: Her concert programmes extended above and beyond any conventional scope with regard to range and difficulty, as may be seen in her performance at the Brussels World's Fair in 1958 and her celebrated "marathon recital" at New York's Carnegie Hall. Until her retirement in 1966, Steber's relationship with Met director Rudolf Bing was marked by a succession of highs and lows. Neither of her two marriages lasted long, and her exhausting private life led to premature damage to her voice. Nevertheless, her popularity in the USA remained unbroken all the way to her death, which provoked great mourning among her many admirers throughout the United States. Peter Davis summarises her career rather unconventionally: "Like many people when they near the end, Steher began to believe in reincarnation, and one wonders if, before she died in 1990, she ever pondered the remarkable similarities between her­ seif and Lillian Nordica. Both sopranos rejoiced in a healthy, well-trained, gleaming voice that could handle a wide-ranging repertory from lyric-coloratura to spinto-dramatic, both learned how to sing at the New England Conservatory, both were inspired to pursue their careers by over­ achieving mothers, both enjoyed their biggest European triumph as Elsa at the Bayreuth Festival; both had miserable bad Zuck with the men in their lives, and, most of all, both worked hard and sang to the end, not because the voice was still there but because they had to. And like Nordica, Steher found complete fulfUment only when she was standing on stage and singing for an audience. "