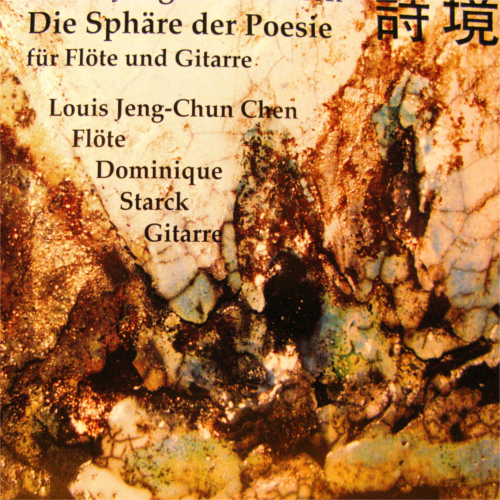 DIE SPHÄRE DER POESIE Dominique Starck (guit) Louis Jeng-Chun Chen (flute) Louis Jeng-Chun Chen born in Taiwan. He completed his studies at the Music Depart¬ment of the National Taiwan University, He was solo flutist in the Taiwan Symphony Orchestra. At the Zurich Musikhochschule he studied with Andre Jaunet where he completed his concert diploma. He attended master classes with C. Klemm, J. Gal¬way and S. Gazzeloni and recei¬ved also strong impulses by N. Renen (Alexander technique) and A. Lassueur (painting), Apart from teaching in Zurich he is performing as soloist and chamber musician in Europe and Asia. He sees himself as an interme¬diary between Eastern and Western philosophy and, on that ground, he writes music and publishes articles on musical philosophy. He also leads inter¬national music courses. Dominique Starck was born in 1956 into a family of musicians from Strassburg, whose musical legacy was passed on from generation to generation. In his youth he played in various band formations as guitarist and composer. He studied at Zurich Conservatory of Music and Musikhochschule Zurich with Gertrud Brun and Walter Feybli and graduated with a concert diploma with distinction in 1978. He studied composition with Josef Haselbach and devoted his further studies to Oriental, Far-Eastern and African music. These were later followed by studies of music education as well as Middle School project management. Dominique Starck's chamber music concert performances in vairous formations (Jazz and classical) have taken him through various parts of Europe and USA. Numerous CD, Radio and TV recordings have been produced over the past years.