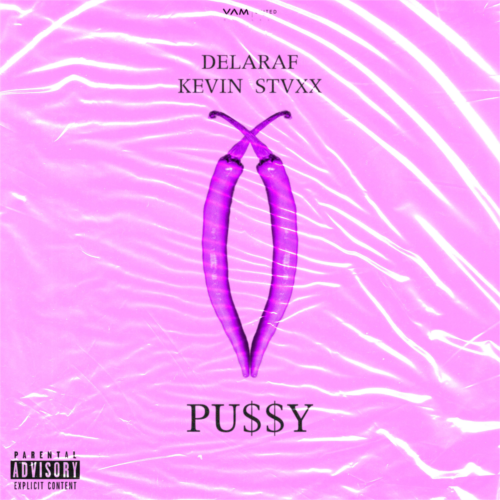 Kevin STVXX and Delaraf are proud to announce the release of their new single entitled „PU$$Y“ viaVAM-United Records. Delaraf is an young, upcoming music producer, composer and audio-engineer. Kevin STVXX is a very talented singer, music producer and composer. Their new collaboration was produced, recorded and mixed by Delaraf and written and performed by Kevin STVXX, mastered by Bogdan Ioan at VAM-United Studios. This weird song is an bizarre combination of Trap, Dubstep and Hybrid-Trap together with Hip-Hop Vocals by Kevin STVXX. There are some hidden secrets inside of this song. For example, a sound from a porno movie, layered with every snare during the both drops and obviously a second porn sound at the middle of both drops. Working with the Serum-Synthesizer, Delaraf created some really weird sounding Lead-Synth-Layers, sounding like a naughty LSD-Trip that will end at a strip-club. The use of heavy sounding 808s during the whole song, makes this song perfect for every party, nomatter if you’re at a club or just at home with your friends or some really bad girls. „During the creating-process, I was just thinking about how pornography on a LSD-Trip would soundlike and the result is one of the weirdest drops I’ve ever made.“ - Delaraf.