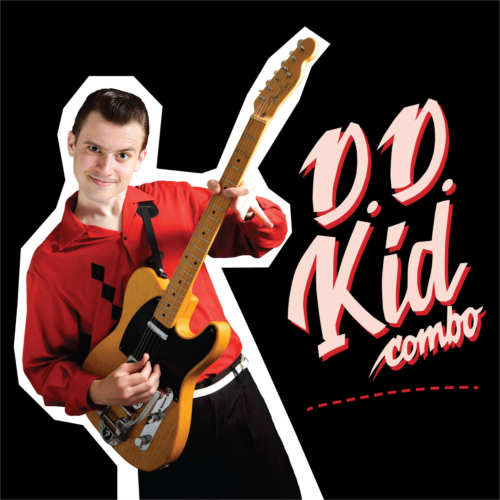 D.D. Kid Combo are DD Kid aka Damir Dimić from B And The Bops (vocal, lead guitar), Fabian Yusuke (The Minnesota Voodoo Men) - slide guitar, Branko Radovancevic (B and The Bops, The High Steppers, ex. The Mad Men) - acoustic guitar and Marko Tizaj (ex. The Mad Men) - drums." Put a crazed bunch of rock rollers in a room, hit record, and you'll capture the kind of raw power that will jump from vinyl and make you move.This is most defiantly the feeling I get listening to D.D Kid Combo!Their sound gives a hearty nod to the past while their energy and delivery propels them into the future with these two new killer tracks!" - Pat Capocci"I like the relentless bluesy stomper feel of these songs - they'd go along well with a raucous night of beer drinking. My favorite parts are the stops in "Goodbye Baby". The guitar doing those 2 descending notes reminds me of a revving motorcycle - sounds real mean and real BIG! Nice main riff in that song, too. The slide guitar by Yusuke is a cool unique touch throughout the whole thing - great solos in "Bad Luck Baby" - very creative. Cool stops at the beginning of that one too. Singing by Damir on both tracks has a lot of character - sounds lilting and then tough, in turns. Can definitely imagine this blasting off the turntables!" - Miss Amy (Jittery Jack)"These guys have a great affinity for this rock n roll stuff. Great record, and the pedal steel bumps it up a couple notches. Me like mucho. If you wanted to show someone from another planet just what this rock n roll stuff is, you could play this for them...Fantastic record. Solid, straight ahead Texas shuffle on one side that rocks mightily. These guys have "it." Other side equally great. Nothing can beat a bunch of guys all playing at once in a room, such a perfect recording..." - Al Perry"Bad Luck" it's a frantic late 1950's-style e of rockin' shuffle and "Goodbye Baby" makes me think of Dale Hawkins doing a Jimmy Reed kind of song in the early 1960's. Great stuff that "rocking" people will enjoy dance to!"-Little Victor