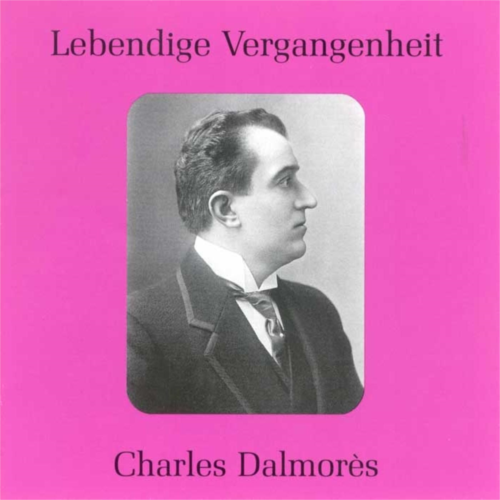 He was born as Henri Alphonse Brin on December 3!51 1871 in Nancy. Just like his tenor­ colleague, Emil Scaramberg (1863-1938), Dalmores, too, first studied horn with great success at the Conservatory of Nancy and later on in Paris. When he had discovered that he had a voice and wanted to work on it professionally, he was warned not to give up a career as a first class hornist in order to become an average singer. From 1890-92 he played in the Colonne Orchestra and for the following two years in the Lamoureux Orchestra as first hornist. At the same time he took singing lessons in Paris with Dauphin and Vergnet. At the Theatre des Arts in Rouen Dalmores made his stage debut on October 6th 1899 as Siegfried, the following year he was engaged at the Theatre de la Monnaie in Brussels, where he remained under contract for six years. In 1901 he was Siegfried in "Götterdämmerung" in the local premiere, in 1903 he created Chausson's "Le Roi Arthus" and was cast in the local premieres of "Louise" and "Tosca". It was during these years that he went to Stuttgart to coach his Wagner-roles (in German) with Franz Emmerich. Between 1904 and 1911 he regularly appeared at London's Covent Garden, where he sang in the first English performance of "Herodiade" and created Leoni's one-act ,opera "L'Oracolo" in 1905. At Covent Garden he could also be heard in "Faust", "Carmeri" (with Destinn), "Romeo et Juliette", "Louise", "Aida" and "Samson et Dalila". From 1906-1910 Dalmores was one of Oscar Hammerstein's busiest and most versatile tenors at the Manhattan Opera (debut as Faust on December 7th 1906). Apart from his well established roles he appeared in the American premieres of "Louise" (with Mary Garden), "Thais" (1907), "Sapho" (1909) and "Griselidis" (1910) and added to his repertory with great success Pelleas, Hoffmann and Herodes in "Salome". 1907/08 Dalmores made guest appearances at the opera houses of Cologne, Berlin and Hamburg and at the Vienna Court Opera in 1908/09. During this tour his "cheval de bataille" was the role of Lohengrin, which he also performed at Bayreuth in 1908 altemating with Alfred von Bary. When Hammerstein closed his Opera House, Dalmores switched to the Chicago-Philadelphia Opera Company and stayed there until 1912. (With this company he also made his only appearances at the MET during a tour.) From 1913 to 1918 the singer was a member of the Chicago Opera. Apart from Faust, Julien, Pelleas and Jean in "Le Jongleur de Nötre Dame", the role of Parsifal had been one of most outstanding achievements in Dalmores' repertory since 1914. More and more he began to focus on Wagnerian roles (sung in German) and was celebrated as Tristan and Siegmund. Zandonai's "Conchita" was one of the few Italian world premieres he took part in and in 1916/17 he added "Le Prophete" to his remarkably broad repertory. He also created Gunzbourg's "Veil Aigle" and Sylvio Lazzari's "Le Sauteriot". After his last appearances at Covent Garden in 1911 his career was restricted to the United States. Although Dalmores returned to France, only for a short time, in 1918, probably the oddest detail about his career is the fact, that he hardly ever performed in his home country and never seems to have appeared in Paris. As a singing teacher he gave lessons in New York and later in Los Angeles, where he died on December 6th 1939, shortly before his 68th birthday. His prior experience as an orchestral player was of immense value for the singer's musician­ ship. He is said to have been a superb actor and his imposing figure - he was a great sportsman and a successful amateur boxer - made quite an impression in roles like Samson or Siegfried. Although the singer left relatively few records, they offer a good view of his versatility. Dalmores had a powerful voice of considerable volume (although he was "rather a Lohengrin than a Tristan", as John Steane remarks) but he could also produce a nearly perfect trill. Occasionally his voice tends to sound not quite free (Michael Scott goes as far as calling it "dull and throaty" on record). His phrasing has style and taste, he knows how to shade and colour and especially in declamatory music bis authoritative style is convincing. Escalais (born 1859), Scaramberg (1863), Clement (1867), Muratore (1878), Devries (1881), Friant (1890), Cazette (1895) and last, but not least, Dalmores formed the impressive phalanx of French tenors during the so-called "Golden Age" - a glorious French Tradition which after World War II slowly but surely has been lost.