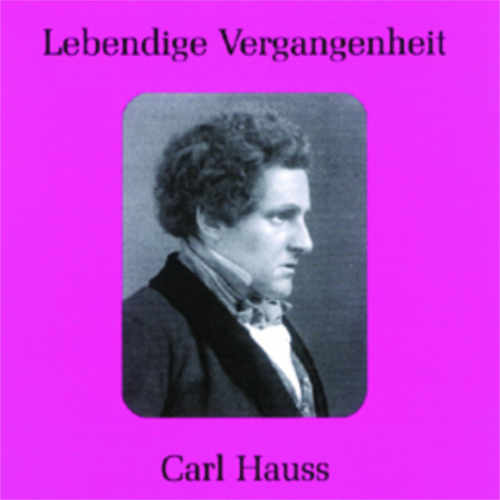 Carl Hauss was born on 4 September 1892 in Strasbourg. His father, a newspaper publisher and also the last German state secretary of Alsace-Lorraine, wanted his son to follow in his footsteps. Thus, after completing his secondary education, Carl Hauss first worked as a typesetter and then as a joumalist at the paper. At the same time, he studied voice at Strasbourg Conservatory, where Hans Pfitzner was director. After the First World War, during which he served four years on the front, he let his brother assume the duties in their father's business and sang his debut in Trier in 1919 as Turiddu (Cavalleria rusticana) under Heinz Tietjen. His debut was such a great success that in the same season he also sang Max in Der Freischütz, Don lose, Lyonel, as well as Mozart's Ferrando and Tamino. From his base in Trier he made guest appearances at the Badisches Landestheater in Karlsruhe in the role of Rodolfo in La Boheme. His partner as Marcello was Benno Ziegler, who was later engaged in Frankfurt and Berlin. Further engagements followed in Saarbrücken and Bochum as well as in Duisburg under Saladin Schmidt. From there, Rudolf Krasselt brought Hauss to the Landestheater in Hanover, of which he was a member from 1926 to 1953. He became an absolute favourite of the audience, and he and his partner, Tiana Lemnitz, made an ideal pair of on-stage lovers. It was thus inevitable that other large opera houses became interested in Hauss. In the 1926/27 season he sang numerous guest performances at the Berlin State Opera. On 31 October 1929 he was a guest at the Vienna State Opera in the role of Manrico and was an instant success. His performance led the feared critic lulius Korngold to write the following. "The diligent search for tenors by the director (meaning Clemens Krauss) appears to be anything but fruitless. Now he has tracked down a singer by the name of Hauss who has been providing both Cologne and Hanover with high Cs. He is a young, indeed a very young man with a nicely cut cinema face, good bearing and lively temperament for singing and acting. His voice is at an interesting stage with regard to timbre. It does not yet flow regularly and freely. In particular, when he is singing in a broad and open middle register, he does not place the higher notes far enough 'in front', and the voice gets thin and tight. But when the singer uses heavy stress, and energetically ventures into heroic coloration, his voice may become a bit stiff, but it gets the desired penetrating power and grip, even in the icy region. After dealing with the preceding F-minor cantilena with a legato that was not bad at all, Mr. Hauss sang the stretta in the original key. Thus he had to brave the perils of two high Cs, and he accomplished it with the added flourish of imploring gestures at the footlights. The victory was his, and it was celebrated with the usual incandescent heat." An equally successful Tamino followed on 5 November 1929. The result of these guest performances was a fixed engagement for the 1929-31 seasons, in which Carl Hauss performed 39 times in a total of 20 roles. Earlier he had sung Emesto in Don Pasquale and the Singer in Rosenkavalier at the 1930 Salzburg Festival. An additional highlight of his career was his performance in the legendary Max Reinhardt production of Tales of Hoffmann in the Großes Schauspielhaus in Berlin in 1931. Hanover, however, remained his permanent house. There is hardly a tenor role that Carl Hauss failed to sing in the course of his long career. There is one, however, that deserves special mention: the title ro1e in the opera Sly by Ermanno Wolf- Ferrari. No other performer has ever sung and played the part of the drunken tavern singer and king for a day as movingly as Hauss. And thus it is not surprising that he was asked to sing the second performance at the Dresden Opera because the premiere there, in contrast to Hanover, had been less than successful. Given this history, it seems rather strange that the recording industry did not take greater advantage of this voice. Deutsche Grammophon made recordings of Carl Hauss in November 1926. These were the first to be made "electrically" -with the use of a micro- phone. Hauss may well be considered a pioneer of this technology. Two records, released in 1927 , resulted from these recording sessions; some of the material was never released. If the two radio recordings had not been made (Ac t 3 from Die Meistersinger and Turandot), these two records would likely have been the only sound documents to survive the artist. Carl Hauss died at the age of 90 on 27 September 1982 in Hanover.