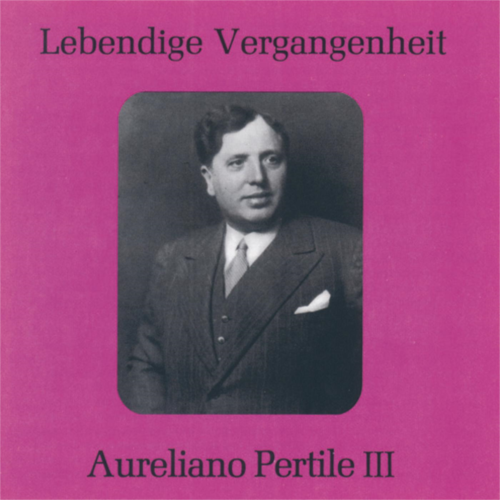 It seems a strange act of fate that two of the greatest singers of this century, two world­ famous proponents of the Italian tenor repertoire, were born in the same place and in the same year: Giovanni Martinelli and Aureliano Pertile. The place was Montagnana near Padua, the year was 1885, and the difference in their ages was just a few days. For all the simi­ laities as to origin, age and sphere of activity, the two singers careers followed different paths. Martinelli's domaine, beginning in 1913, was the Metropolian Opera, while Pertile's main artistic way station was La Scala in Milan. There were also notable differences in their development. Initially, Martinelli did not intend to become a singer; his voice was discovered by accident during musical tests while he was in the army. Aureliano Pertile, on 'the other band, was still quite young when he began aspiring towards a musical career. As a child he sang in church choirs; later he made a serious study of music and music theory. In 1906 he began taking singing lessons from Maestro V. Orefice in Padua, and he subsequently studied with Bavagnoli in Milan. He first appeared in public as an opera singer in February 1911, marking up his first big success as Lyonel in Flotow's "Martha" in Vicenza. He quickly built up a large repertoire and over the ensuing years he was greatly in demand in opera houses throughout Italy and in South America. In 1916 he was invited to join La Scala in Milan. For the time being this was not possible, for the opera house was forced to close for several years because of the war. During the 1921/22 season Pertile sang at the Metropolitan Opera, but when in 1922 La Scala again opened its doors, he returned to Milan. Under the aegis Arturo Toscanini, who for the next decade was the guiding spirit of La Scala, Pertile developed into one of the most outstanding protagonists of the now legendary ltalian opera ensemble of these years. Until his official farewell from the stage in 1937 Pertile was one of La Scala's most celebrated members. He continued giving occasional performance there until 1940. In between he made guest appearances in London, Paris, Brussels, Berlin and Vienna. His performances in the arena in Verona were especially popular, and his appearances on the open-air stage at Vienna's "Hohe Warte" are still well remembered. After Pertile had retired from the stage he was frequently heard in concerts and on the radio. In the last years of his life he worked as a voice teacher. Pertile's repertoire took in the whole range of Italian tenor roles, the Donizetti, Verdi and Puccini operas. The main emphasis was on parts of a dramatic nature. His fiery stage temperament made him one of the greatest singers of Italian verismo operas. His Radames, Manrico, Othello, Andrea Chenier, Canio, Nerone (Boito and Mascagni) became especially famous. Pertile took part in a number of world premieres (operas by Mascagni, Nougues, Wolf-Ferrari, Montemezzi, Zandonai), and he also scored big successes in the French repertoire ("Carmen", "Fra Diavolo", "Louise") and as a Wagner singer (Lohengrin, Walther von Stolzing). Pertile has a place in the history of vocal art as the prototype of a ''Toscanini voice' '. He was the.perfect embodiment of all those qualities to which the unrelenting maestro attached the greatest importance: the highest degree of musicality, sensitivity, emotion-laden presentation and an art of phrasing that was without equal. Toscanini often called Pertile his favorite tenor. Pertile's intense tenor voice is preserved on a large number of recordings which are among the finest and most precious that the medium has ever given us.