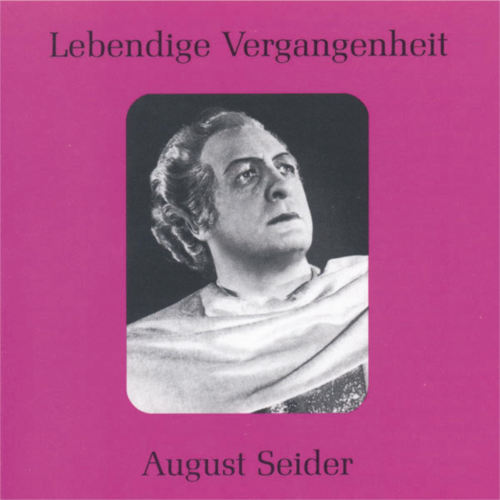 The heldentenor August Seider was born on February 11th 1901 in Leverkusen­ Wiesdorf near Cologne. In the Twenties he studied singing at the Cologne Conservatory of Music where his teacher was Professor Eladio Chao, who had sung with Caruso. Having finished his studies Seider was offered his first engagement at the Cologne Opera House for the season 1928/29. Already in the next season he moved on to Halle, then spent the years 1930 to 1947 at the Neues Theater in Leipzig. Lyric tenor roles were his domain during his first two years but by 1932 he could be heard as Stolzing in "Die Meistersinger von Nürnberg". The following year he made his international breakthrough in this very role. On August 8th 1933 Seider appeared at the Teatro Colon in Buenos Aires as Stolzing in the opening performance of the German Opera Season. During that season he also appeared as the Italian Singer in "Rosenkavalier" and the Young Sailor in "Tristan", where the title role was sung by Lauritz Melchior. With incredible speed Seider worked on new roles, particularly Wagner ones. On May 18th 1935 he made his debut as Lohengrin and on May 22nd 1935 as Manrico at the Vienna State Opera. Three months later he was heard once more as Stolzing at the Zoppot Festival. On June 31st 1936 the 35-year-old tenor appeared for the first time at the Munich Opera Festival, again in his most famous role with Tutein conducting. Seider sang the role of Stolzing with "a powerful and bright voice and a gloriously ringing top". Guest performances on all the major European stages were to follow. In 1937 he appeared at the Berlin State Opera and at the Munich Opera Festival as Stolzing and in Vienna as Lohengrin. During the 1937Bayreuth season Seider was scheduled to sing Lohengrin but was already under contract to sing the role at his "home house" at Leipzig. When director Tietjen asked him to chose between either Bayreuth or Leipzig Seider had to decide against Bayreuth. In the meantime he had enlarged his Wagner repertory: He now sang Erik, Lohengrin, Stolzing, Siegmund, Parsifal, Tannhäuser and Rienzi. Under the direction of Wilhelm Furtwängler on August 19th 1938 he sang Stolzing to an enraptured public at the Salzburg Festival. In the same year he appeared as Tannhäuser under Knappertsbusch in Antwerp. From 1940 until the end of the War Seider performed regularly at the Richard Wagner Festival in Barcelona where he sang Stolzing, Siegmund, Erik and Tristan. In Italy he appeared in Florence, Genua and Milan. In Zurich he was acclaimed as Apollo during the June-Opera Weeks of 1941. The War interrupted Seider's career at a point when he was at the height of his powers as both interpreter and singer in the heroic fach, but with the help of Hedwig Fichtmüller in 1947 he obtained an engagement at the Bavarian State Opera in Munich. Seider cancelled his contract with Leipzig and moved to Munich where already in his first season the public could admire his versatility singing the roles of Otello, Don Jose, Cavaradossi, Florestan, Siegmund and Tristan. The tenor also was able to resume his international successes. After World War II he was the first German singer to be invited to London's Covent Garden where he sang Tristan (with Kirsten Flagstad as Isolde) on February 19th 1948 and subsequent per­ formances in the presence of the Royal family. Further guest appearances brought him to Lisbon, Rio de Janeiro and Rome. Seider's Isolde in Rome was a new discovery in the dramatic fach of whom one expected great things - Maria Callas. Mention should also be made of his performances in South Africa: In 1949 and 1950 Seider spent his three months' leave from the Bavarian State Opera at the opera houses of Johannesburg and Pretoria where his roles included Tannhäuser, Canio, Radames and Samson. During his engagement at the Bavarian State Opera Seider appeared in up to 60 performances each season, although during his last years he reduced the number somewhat. Until the late Fifties Seider continued to sing the heavy Wagner roles but gradually switched to the character parts which found in him an excellent interpreter. In 1955 he appeared at Covent Garden as Herod in Strauss’s “Salome” and returned with great success in 1957 for the Drum Major in Berg's "Wozzeck". He also sang the latter role in a production by Jean Louis Barrault at the Grand Opera in Paris on November 29th 1963 conducted by Pierre Boulez. August Seider bade farewell to the operatic stage in 1967.