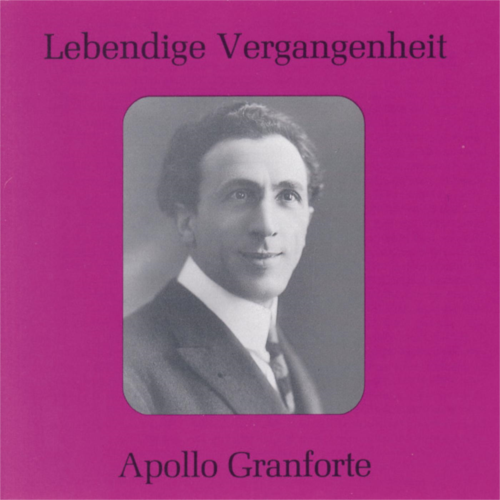 Three singers are customarily regarded the paragons of Italian baritones: Mattia Battistini, Titta Ruffo and Giuseppe De Luca. The superb belcanto specialist (Battistini), the towering vocal phenomenon (Ruffo) and - stylistically midway between the two - the baritone who combined the virtues of an exquisite voice with thorough schooling (De Luca). As logical as this classification may seem, it is nevertheless incomplete. There have been quite a number of excellent Italian baritones artistically sufficiently diverse to resist easy categorization. Typical examples are Domenico Viglione-Borghese, Cesare Formichi, Riccardo Stracciari and Apollo Granforte - all of them great artists, no less important than the kingpins mentioned above. Moreoever, these three baritones had dark-hued voices, they were "genuine" baritones in fact, quite unlike Battistini, De Luca and Ruffo, with their almost tenorial range. The voice of Apollo Granforte was one of the most impressive ever to have been preserved by the gramophone. It was not only refulgent and perfectly blended, Granforte also had a marvelous parlando technique. He was, moreover, a grandiose vocal actor, a fact which is amply verified by his recordings. Granforte came from a humble background. At an early age he was apprenticed to a cobbler. At the age of eighteen he and his brother left Italy for Argentina. There he tried to earn his keep in the trade he had learnt but soon his vocal abilities became evident and he was advised to concentrate on singing. In 1905, the year he emigrated, he enrolled as a student at the Buenos Aires conservatoire and - a rare example of industry and persistence - studied the basis of belcanto technique for nine years. In 1913 he made his debut as Germont at the Politeamo di Rosario di Santa Fe. Subsequently he sang with increasing success at the various opera houses in South America. At the beginning of the war, Granforte, a fervent patriot, returned to Italy to fight at the front but continued his operatic career in 1916, appearing at the Teatro Costanzi in Rome and Teatro da Verme in Milan. 1921 he was engaged to appear at La Scala, where he remained a pillar of the ensemble until the beginning of the Second World War. He frequently appeared as a guest artist in Paris and Australia (in Nellie Melba's own opera company), London and South America. Granforte took part in several world premieres, including Mascagni's "Nerone" at La Scala in 1935. In the twilight of his career he appeared in Triest and various' other Italian cities. He also enjoyed great fame throughout Italy as a broadcasting artist. Apart from the standard roles of the Italian belcanto-.and verismo repertoire, Granforte also sang a large number of Wagner roles. His first role at La Scala was Amfortas (directed by Toscanini). Subsequently he sang Wolfram, Kurwenal, Telramund and the Wanderer. Jochanaan in „Salome" and Boris Godunov also numbered among his most important characterizations. After terminating his singing career, Granforte lived for a time in Ankara as a vocal coach. For a brief span he was also the director of the National Theatre in Prague. Eventually he returned to Italy where be became a much sought advisor on all matters related to singing. Granforte's vibrantly powerful voice has been -preserved on numerous recordings including four complete operas (Pagliacci, Tosca, Otello and Trovatore). Especially his lago was and is generally deemed a well-nigh perfect characterization - the eternal glory of his great art.