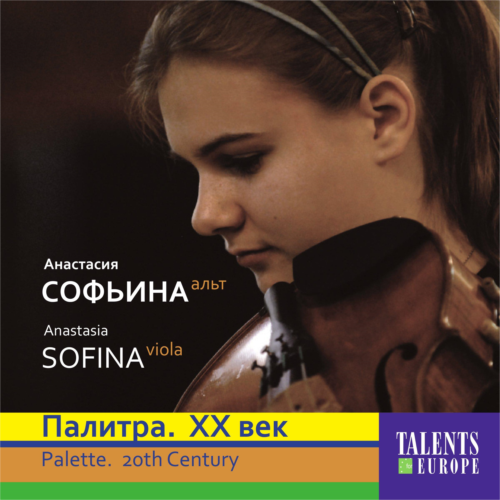 Anastasia A. Sofina is a young Russian musician, who have amassed a collection of prizes in the 14th Bohdan Warchal’s International Competition in playing the bow string instruments “Talents for Europe” (2010, Dolny Kubin, Slovakia) including won the Competition’s Main Prize, 1st Prize in Viola category, Prize for the best performance of the 20th century work and Musica Arvenzis Prize. Anastasia was born in Moscow in 1991 in the family of biologists. From 4 years she attended musical lessons at the M. Balakirev‘s School of Arts, and in 5 have enrolled in the preparatory division of this school in Tatiana A.Solovieva‘s class of violin, who promoted a love of the instrument for the little girl. In the 1998 spring Anastasia have enrolled in 1st form of The Central Musical School at P. I. Tchaikovsky Moscow State Conservatory, where she studied violin playing in the class of Maria I. Sitkovskaya until October 2005. From the fi rst year Anastasia wanted, as she said, „to sing by the viola, but not to play the violin“. To achieve this goal she has shown admirable persistence, overcoming all obstacles that will inevitably get in the way of a talented person. Since October 2005 Anastasia have began playing the viola, and in December 2005 she have moved about Elena A. Kochergina‘s viola class, in which she received the fundamentals of the viola performing. In 2006 Anastasia entered the Musical College (secondary musical education) at A. Schnittke Moscow State Institute of Music in the Professor Igor I. Boguslavsky’s viola class. Studying here she proved to be a viola soloist with outstanding musical abilities. She well ahead and quickly develops the curriculum. Currently Anastasia Sofi na continues to work hard to expand her solo, chamber and orchestral repertoire. Her teacher, Professor Igor I. Boguslavsky plays extraordinary role in all of this. In December 2007, the fi rst time participating in the contest, Anastasia Sofi na have won the 1st Prize of the middle age group of 2nd M. Elsky String Bowed Instruments International Competition in Minsk (Belorussia). Since then she regularly participates in various competitions and practically always wins them. Now she already is the prizewinner of 7 competitions. She also regularly participates in various festivals and master classes in diff erent countries of Europe. These are such festivals of chamber music, as 11th Musica mundi International Festival and Master classes of chamber music (2009, Belgium, Waterloo), 10th Lionel Tertis Viola Festival and Competition (2010, Port Erin, Isle of Man), 60th the Pablo Casals Festival of chamber music (2010, Prades, France), Norwegian Youth Chamber Music Festival (NYCMF 2010, Stavanger, Norway). Since 2011 she has become one of the ten young soloists, invited by NYCMF permanently. Anastasia is a grant-holder of Mstislav Rostropovich Foundation, and in 2009 and 2010 she got the Annual Award of the Moscow Government for the most talented students of educational institutions under the jurisdiction of the Moscow Culture Department also. After the meeting in 2010 with Russian composer Shandor Kallosh, Anastasia performed the world premiere of his work for voice, viola and CD “The Prayer”. Besides she recorded his music for radio and TV productions.