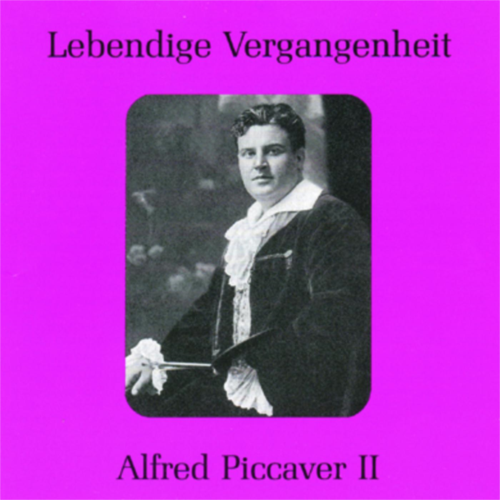 Alfred Piccaver, one of the most famous and popular tenors in the first half of this century, was born 1884 in England to parents of Spanish decent. He was taken as a child to New York, where, after training as an electrician, he worked for a short time in the laboratories of Thomas Edison, the inventor of the light bulb. However, the course of his life was altered by the profound impression Enrico Caruso, who was then at the Metropolitan Opera, made on him. Piccaver modelled his own singing on Caruso's, and throughout his life continued to emulate the older tenor's technique and artistry. Tue turning point came in the Tirol, where both he and the Prague impresario Angelo Neumann were vacationing. Under Neumann's encouragement Piccaver finally took up the study of voice, first in Prague and then in Milan. He made his debut in 1907 in Prague as Romeo in Gounod's Romeo et Juliette. In 1910 he sang in Vienna on a trial basis the roles of the Duke in Rigoletto and Don Jose in Carmen among others and two years later was given a permanent appointment in the Vienna Court Opera (later Vienna State Opera). By then he had already successfully replaced his predecessors Emest van Dyck and Franz Naval in the hearts of the Viennese. His voice was now in full bloom and the director Hans Gregor soon assigned all the lyrical roles to him. He laid a true tenor voice with an effortless high register as well as a rich baritone bottom and an overall warm and tender tone. His exemplary vocal projection, sustained by almost endless breath, allowed him to linger on the fermatas so beloved at the time (and feared by many tenors). Within the Mozart repertory he sang Don Ottavio, but otherwise cultivated Verdi and Puccini tenor roles, to which his voice was especially suited. He also successfully executed the heroic roles of Radames and Lohengrin, as well as of Florestan, which he sang together with Lotte Lehmann in the centennial celebration of Beethoven's death in March of 1927. However, nothing approached the beauty of his cantilena in such operas as Mignon, Andre Chenier, Werther, and Carmen. Piccaver could afford to turn down roles which were not good for his voice and thus protected his incomparable mezza voce right into retirement. He sang for the very last time on June 2, 1937 in a performance of Tosca, without however, announcing that he was taking leave of the stage. Shortly before the outbreak of the second world war he moved with his wife and son to London, where he lived in semi seclusion. But when in the autumn of 1955 he returned to Vienna for the reopening of the opera house, which had been destroyed during the war, he could not bring himself to leave Vienna and died, there on September 23, 1958. One can hardly imagine today just how beloved and idolized Piccaver was in Vienna. His every entrance on stage was applauded, his big arias were rewarded with long ovations, and on the final curtain he was regularly called back innumerable times. He was always the gentleman and grandseigneur on stage, but in private he was lovable and modest despite the adulation. He was highly esteemed by the great composers of his time, especially Puccini, who insisted that his opera Manon Lescaut be produced with Piccaver and Lotte Lehmann, and Richard Strauss, who requested Picaver to add Bacchus in Ariadne auf Naxos to his repertory. Alfred Piccaver treated his voice as a valuable instrument, which he protected with a technique that could cover every hint of indisposition.