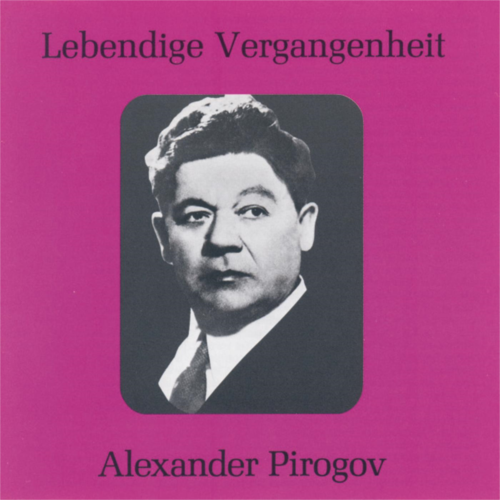 Alexander Pirogov was the youngest - and subsequently most renowned - scion of a Russian family of singers from Rjasan, near the Oka river, a region of Central Russia well-known for its vocal talent. Alexander's grandfather, the coachman Ivan Pirogov, had such a sonorous voice that it was known as "the bell of Ivan the Great". Also, Alexander's father, Stepan Pirogov, a carpenter in a raftconstruction brigade, was generally deemed a superb natural vocal talent. Stepan Pirogov's five sons - all of them basses, moreover - inherited this vocal talent; four of them became professional singers: Grigory (1885-1931), Mikhail (1887-1933), Alexei (*1895) and Alexander. By general consent the greatest talent was that of the fifth brother, Ivan, who was killed shortly after the outbreak of World War I. With the exception of Mikhail, the three other brothers eventually became soloists of the Bolshoi theatre. Alexander Pirogov's vocal prowess first came to general attention when he was 16 years old. The eldest brother, Grigory, at this point of time already a well-known singer, managed to arrange tuition for the youngest and became his mentor and advisor. He ensured that Alexander 'was sent to Rjasan high school. After completion of his schooling, Alexander joined Grigory in Moskow. There he enrolled at the historical-philological faculty of the university and, at the same time, started his vocal tuition at the music college of the Moscow Philharmonie Society, joining the class of V.Tjutjunnik. His vocal training progressed so rapidly that already at the age of 21 the management of the Bolshoi invited him to audition. Although he was subsequently offered an engagement, he decided to wait. While continuing his studies, he aquired first stage experience, singing in the chorus of the "touring theatre of the revolutionary people' s council". In 1922 he became member of the Moscow "Free Opera", a private - and renowned - operatic enterprise run by the maecenas and theatre manager, Sergei Simin. He made his debut as St. Bris in Meyerbeer's Grand Opera "Les Huguenots". He spent three fruitful years there, during which he continuously expanded his repertoire. When the Simin opera was forced to close in 1924, he joined the ensemble of the Bolshoi theatre, where he remained for the rest of his career. In the course of 30 years he sang there more than 1100 times. Artistically he was influenced by conductors like Viacheslav Suk, Nicolai Golovanov and Samuil Samosud. Among Alexander Pirogov's most important roles were the eponymous heroes in Glinka's "Ivan Susanin" and "Ruslan and Ludmila", Borodin's "Prince Igor" (where he sang both Igor and Prince Galitsky), Ivan the Terrible in Rimsky-Korsakov's "Pskovitianka", the Miller in Dargomyzhsky's "Rusalka", Gremin in "Yevgeny Onegin", Don Basilio in "Barbiere di Siviglia", Gounod' s Mephisto, Nilakantha in "Lakme". His most outstanding role was Mussorgsky' s "Boris Godunov", which he first sang on February 12, 1929. This portrayal was documented in a film of the opera, as well as a phonograph recording under Golovanov (1949). Pirogov' s art has been preserved on numerous recordings. In complete recordings he sang Gremin (under Nebolsin, 1936), Galitsky (twice under Melik-Pashayev, 1941 and 1950), Miller (under Nebolsin, 1948), Salieri (under Samosud, 1948), Ivan the Terrible (under Sakharov, 1947), Mephisto (under Nebolsin,1947). Pirogov recorded a number of recitals of arias and songs and was also involved in comprehensive phonograph anthologies of Tchaikovsky and Rachmaninov romances. Contemporary Soviet music was an important aspect of Pirogov' s repertoire. In 1953 he sang the role of Pestel at the Bolshoi Theatre in the world premiere of Yuri Shaporin's "Tue Decabrists". Further modern works in which he appeared were: "Tue son of the sun" by Vasilienko, "Almast" by Spendiarov and "Battle cruiser Potemkin" by Tchishko. His last main role was Marshall Kutusov in Prokoviev' s monumental historical opera "War and Peace". Apart from his stage roles, Pirogov gave numerous recitals. If one endeavors to characterize Pirogov' s voice and style, then, in comparison to his bass rivals at the Bilshoi theatre - Mark Reizen and Maxim Mikhailov - he was vocally and histrionically the more suggestive singer. Frequently expressivity took precedence over musical perfection and vocal subtlety. Pirogov' s vehement temperament and intensity was evident, above all, in scenes and situations that required the utmost "presence", such as the hallucinations of Boris, the Miller's madscene in "Rusalka" or the sarcastic outburst of Mephisto. Although Pirogov' s vocal registers, vibrato and legato were not as equalized as those of basses like Boris Gmyria or Mark Reizen, his recordings are notable for their vitality, dramatic verisimilitude and expressivity.