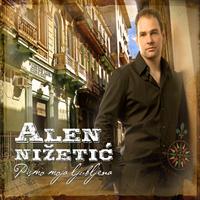 He started his career as a voice for Tutti Frutti band back in 1995. Year later his first festival performances was pretty fruitful and he records his first album with Tutti Frutti band. In 1997 he decides to go solo, he went to Bratislava for the Golden Harp festival and ends first, which made him popular even in Slovakia. Later same year he won most important festival of Dalmatian pop called "Splitski festival zabavne glazbe". His career went sky hight where he remains along with the other stars of Dalmatian pop. This is his latest album.