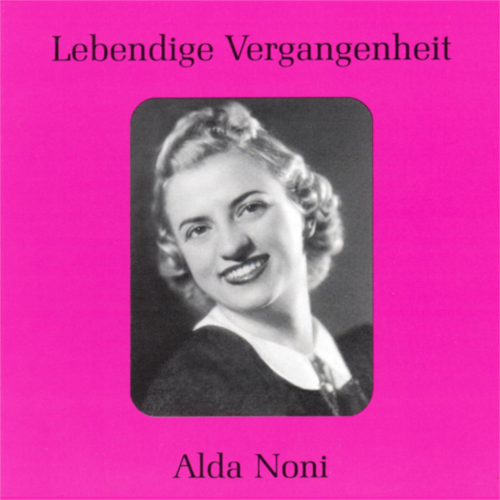 Alda Noni, born 30 April 1916 in Trieste. Born in Trieste, Alda Noni began her musical studies at the Conservatorium of her home­ town at the age of 13. Initially she sought a career as a pianist, but following vocal instruction from Professor Delfino Menotti she turned to opera instead. In 1937 she sang her stage debut as Rosina in Rossini's Il barbiere di Siviglia at the opera in Ljubljana before working in Zagreb (1938-40) and Belgrade in the 1940-41 season. An important step in her career came with her engagement at the Vienna State opera, where she first sang at the beginning of the 1941-42 season. Vienna then became her artistic home until the house was closed in 1944 because of the war. There she was extremely successful in numerous coloratura and lyric soprano roles, such as Despina in Mozart's Cosz Jan tutte, Rosina in Il barbiere and Norina in Donizetti's Don Pasquale. Among the Verdi roles in her repertoire were Gilda in Rigoletto and the page Oscar in Un ballo in maschera. lt should be noted that at that time all of these were sung in German, of which Noni had perfect mastery. Among the other roles she sang in Vienna were Mozart's Queen of the Night, Flotow's Martha and Nuri in d' Albert's Tiefland. A role in which she was parti­ cularly brilliant was Zerbinetta in Ariadne auf Naxos, which she sang in the presence of Richard Strauss on 11 June 1944, in a special performance to mark the composer's eightieth birthday. Fortunately, this performance conducted by Karl Böhm (with Maria Reining, Irmgard Seefried, Max Lorenz and Paul Schäffler in other major roles) was pre­ served in a recording. During her engagement in Vienna, Noni made guest appearances in Berlin, where she also made her first records. Before the war was over, Noni returned to Italy, continuing her rapidly advancing career at the Rome Opera. In 1944 she sang the title role in Donizetti's Lucia di Lammermoor in Trieste, a role she repeated several years later (1948) at the Baths of Caracalla in Rome. In 1946 she made a guest appearance at London's Cambridge Theatre as Norina. Between 1949 and 1953 she sang at La Scala in Milan, where her debut role was Carolina in Cimarosa's Il matrimonio segreto. In 1950 she sang Gnese in Wolf-Ferrari's Il cam­ piello. In the early 1950s she appeared at La Scala in several Giorgio Strehler produc­ tions, which created a sensation at the time: Piccinni's La buonafigliola and Donizetti's Don Pasquale and L'elisir d'amore. In 1954 she sang in the Naples revival of Paisiello's opera Don Chisciotte della Mancha (1769). To the roles already mentioned she added Zerlina in Mozart's Don Giovanni, Susanna in Le nozze di Figaro, Papagena in Die Zauberflöte, Amina in Bellini's La Sonnambula, Nannetta in Verdi's Falstaff and Gretel in Humperdinck's Hänsel und Gretel. In the Puccini opera La Boheme she sang Musetta and in Gianni Schicchi she was Lauretta. In addition, she sang Leila in Bizet's Les pecheurs de perles and Sophie in Massenet's Werther. In the 1952-53 season she appea­ red at the Rome Opera in Carlo Jachino's Giocondo e il suo re as weil as in the produc­ tion of Poulenc's Dialogues des Carmelites (in the role of Constance) and as Lucieta in Wolf-Ferrari's I quattro rusteghi. Her artistic career took her to Florence, Naples, Palermo, Genoa, Bologna, Pisa and other Italian cities. She appeared at London's Covent Garden Opera and the Paris Opera and also sang in Barcelona, Madrid, Rio de Janeiro, Lisbon, Oslo and the festivals of Glyndebourne and Edinburgh (Blondchen in Mozart's Die Entführung aus dem Serail, Despina, Clorinda in Rossini's La Cenerentola, Oscar). In 1947 she returned once more to Vienna, the city where her international career had begun, making guest appearances as Gilda and Violetta in Verdi's Rigoletto and La traviata, respectively. Her perfect coloratura and clear and pure soprano voice, combined with her vivacious and charming manner of performance, made her an important and delightful opera performer of her epoch. She devoted her singing and acting talents to works of the preclassical period as well as the operas of Mozart, Rossini, Donizetti and Verdi and was also successful in contemporary opera roles. She ended her career in 1958. Noni's vocal artistry has been documented on recordings, some of which date from the period of her engagement in Vienna. In the years after 1945 she participated in numerous recordings of complete operas, singing major roles (Mozart:·Le nozze di Figaro, Die Zauberflöte, Don Giovanni; Cimarosa: Il matrimonio segreto; Fioravanti: Le cantatrici villane; Rossini: La Cenerentola; Donizetti: L'Elisir d'amore, Don Pasquale, Lucia di Lammermoor; Verdi: Un hallo in maschera; Wolf-Ferrari: I quattro rusteghi).