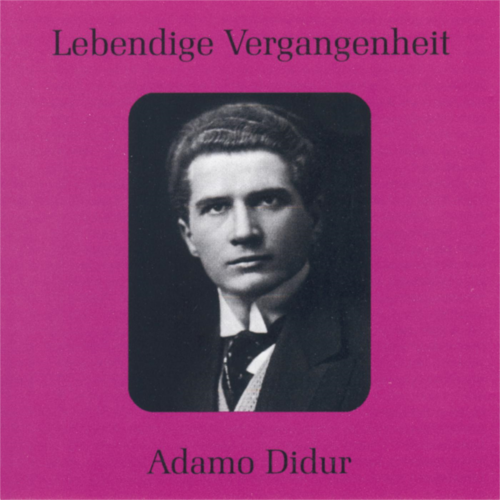 Adam - respectively Adamo, as he himself italianized his name - Didur's name must be listed among those of the most outstanding basses of our century. He does not have to fear comparison with the·1ikes of Plan on, Rothier, Journet or Mardones, to name just a few. The main features of his voice are not only its richness of tone and at the same time, a rare softness in his timbre, it also had - especially for a bass-voice - an astonishing agility. The singer's extraordinary vocal range, too, is most impressing: it started out at a contra C and reached a G, even a G sharp. In addition to these rare vocal gifts Didur was a passionate and expressive stage-actor. The singer was born in Wola Sekowa near Sanok / Galicia on December 24th 1874 and studied voice at the Conservatory of Lvov and later in Milan. In 1894 he made his stage-debut at the Opera House of Rio de Janeiro and gained his first experiences on the stages of Buenos Aires, Cairo and Messina. From 1899 on he remained at the Warsaw Opera House for four years: then, at the turn of the Century, the Polish capital dedicated itself in grand style to ltalian Opera. The most illustrious stars of ltalian belcanto­ tradition regularly gathered at Warsaw. As a result of the excellent cultural relations between Poland and ltaly, Giulio Gatti-Casazza, then impresario of the Scala di Milano, took the young singer under his wings and strongly influenced Didur's career. Soon, Mattia Battistini, too, who himself was a regular guest at the Warsaw Opera House for many years, became an eager supporter of Adamo Didur. In 1896 he made his debut at Milan's Scala, where within only a short time he established himself as one of the Scala's leading singers. Until 1903 he mainly performed in Milan and Warsaw, in the years that followed he extended his appearances to several other opera houses of inter­ national reputation. In 1905 he gave a glorious first performance in London on the occasion of a guest performance with the ensemble of the Monte Carlo Opera as Boito's Mefistofele (with Giachetti and Zenatello). Oscar Hammerstein took him under con­ tract for the second season of his Manhattan-Opera in 1907, where he appeared in "La Gioconda", "Faust" and "Don Giovanni". When Giulio Gatti-Casazza, who had witnessed the singer's overwhelming successes at La Scala some years earlier, became director of the Metropolitan Opera in 1908, he hurried to secure Didur's services. His debut performance was at the opening night of the 1908/09 season and featured Caruso, Destinn (who also made her MET debut), Scotti and Homer in "Aida". Until 1933, for more than two decades, Didur remained one of the brightest stars at the MET. In more than 50 roles he was able to demonstrate his extraordinary talents. Among his most memorable achievements at the MET were his appearances in the world premieres of Puccini's "La Fanciulla del West" (with Caruso, Destinn andAmato in 1910), "II Tabarro" (with Montesanto, Muzio and Crimi) and "Gianni Schicchi" (with De Luca, Easton and Crimi) in 1918 and Humperdinck's "Königskinder" (with Farrar, Jadlowker and Homer) in 1910. The large number of American premieres he took part in also shows the artist's rank at the MET at this time: Franchetti's "Germania", Mascagni's "Iris" (1908), "Pique Dame" (1910 under Gustav Mahler), Wolf-Ferrari's "Le Donne Curiose" (1912), "Boris Godunov" (1913), Montemezzi's "L'Amore dei tre Re" (1914)- a role which remained closely associated with him - "Prince Igor" (1915), "Lodoletta" and "Le Coq d'Or" (both 1918), "Eugen Onegin" (1920), "La Cena delle Beffe" (1926) and Leoni's "L'Oracolo" (a great success for both him and Scotti) - a truly impressing list which does not end here. Didur's extensive vocal range enabled him to sing both bass- and baritone-roles, whereas his versatility as an actor made him an excellent interpreter of both tragic and comic characters. During the later years of his career the number of his performances, by that time mainly in smaller roles, continued to diminish, for towards the beginning of the Twenties Didur's voice, especially his higher notes, had begun to show considerable signs of wear-and-tear. On February 26th 1933, the year in which he also celebrated his 25th anniversary at the MET, Didur gave his farewell performance as Verdi's Falstaff. Adamo Didur, who was a favourite singer of Toscanini, returned to his home country in 1939. Due to the political circumstances during World War II he was not able to accept the honorary chairmanships he was offered in Lvov and Warsaw. After the end of the War he accepted a professorship at the Conservatory of Katowice, but died there soon afterwards on January 7th 1946.